As many of you probably already know, this past weekend was my first time vending- ever! It’s been a whirlwind of an experience, and I thought I would take a moment to write down some of my thoughts of the last few months, and the months ahead! 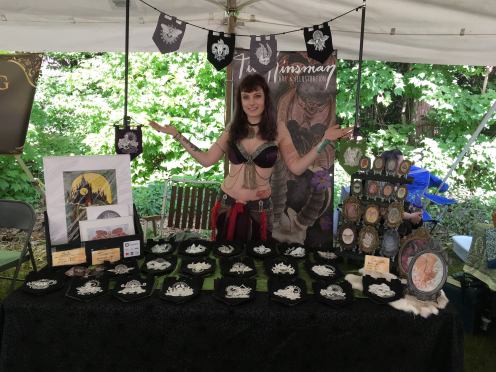 The setup, and me!

The faire in question was Mutton and Mead, a great local fest that has been steadily growing for quite some time now. I went last year as a patron and loved how casual and fun it was, and I thought it would be a great place to start my journey into selling my work! I’ve been going to faires for about a decade now, so it only made sense that I evolved and started being a part of them.

I had started the whole process of getting ready in March, after my application for a table had been approved. Between working full time and trying to prep close to 200 banners and 40 original cameos, it was a lot of work, most week days ended up being 12-16 hour days! I was a nervous wreck half the time, since I didn’t know what was going to sell, if anything, or if it did if I would run out of stock on the first day and be twiddling my thumbs come Sunday. I had nothing to really look at or go by, since my banners aren’t something that are seen very often (if at all!). Luckily for me, it has all been a labor of love.

The weekend itself had me petrified for a few days beforehand, as the closest experience I had was being a cashier; and lets be honest here, I hated every minute of it when I was one. I was nervous about having to handle money, fearing I’d mess up how many zeros on a card transaction, or give people the wrong change. I was also worried my work wouldn’t be received well either, what if no one liked creepy zodiac signs or bugs?

To my (and everyone else’s) surprise, I ended up being a natural saleswoman and not even the slightest bit nervous the whole time. A bit awkward, of course, but who isn’t at a ren faire? My experiences of going to 2-4 faires a year had actually helped me feel at ease and like I belonged there, it was almost just like a normal day at the faire for me! (Except, of course, I was on the other side of it this time.)

The weekend ended up being a wild success and I had a lot of fun! I ended up doubling what I expected to take in, as well as had offers for two other events. The majority of people who stopped by my table seemed to have enjoyed my work, even if they didn’t buy anything.

Now, I’m even more excited for my next faire, the Market of the Moons at the end of July! I will be ready and waiting for both weekends of the event! I may also be making appearances at CT Ren Faire and the Jewelry City Steampunk Fest, so stay tuned!

How's your Saturday going? 🐒 I've been wanting to draw a flying monkey for a while so I'm taking the opportunity! 🙉 . . . . #illustration #darkartist #drawing #artist #creative #dailyart #spoopy #inkwork #spooky #alchemy #witchyvibes #wip #saturday #artnerd
How are you all holding up? 💀 Things are settling around here so I'm hoping I'll be able to concentrate better and get more work done. It's been hard to focus and super frustrating! But I got this shady lady done, and I'm pretty happy with it 🐍 . . . . . #illustration #drawing #instaart #dailyart #spoopy #inkwork #darkartist #medusa #snakecharmer #bellydancer #sideshow #happy #fineart #galleryartist #art #artnerd
Got some goodies in the mail today from @hookieduke and I'm so excited about it! 🌟 Everything I've gotten from her is so high quality, I can't even.